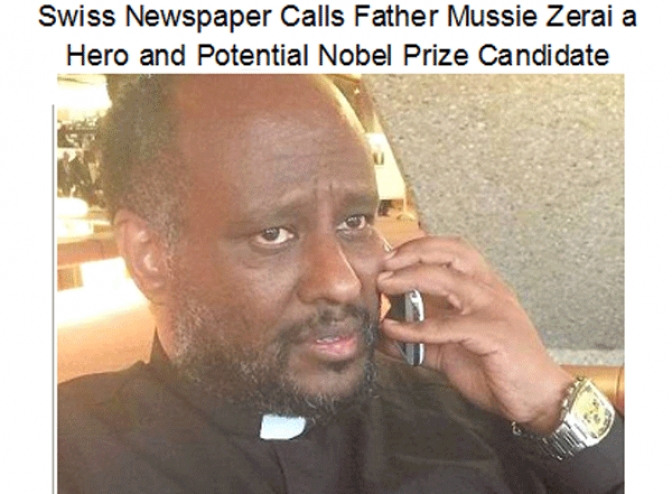 The 20 November issue of Le Matin, a daily French newspaper in Switzerland, carried a small item on Abba/Father Mussie Zerai entitled “Miraculous: This Priest Saves Lives from a distance by his mobile phone”, in which the writer believed the Eritrean priest is a yet little known hero who is viewed by some people as a potential future candidate for Nobel Prize for Peace.

A quick translation of the item goes like this:

“His name may, for sure, mean nothing to you (the reader). Yet, this Eritrean priest who lives in Erlinsbach (Swiss Canton of Solothurn), and viewed by some people as a future Nobel Peace Prize winner, is a hero. Since 2003, through repeatedly sending his mobile telephone number to  all directions, he has saved thousands of lives of migrants lost between Africa and Italy by informing coast guards about their situation. These contributions give him the legitimacy to have enjoined recently at law court to Europe to come out of its ‘logic of militarized fortress’”.

Fr/Abba Mussie Zerai is currently assigned to Switzerland by the Eritrean Catholic Church in Asmara to serve the community of believers by a hectic shuttle in visiting 13 urban centres in Switzerland. On top of this, he is always on the phone communicating with Eritrean refugees in distress – both at sea, those in North Africa and others facing acute problems while inside Europe.

A googled piece also reads as follows him:

“Father Mussie Zerai has been working with refugees and emigrants to Europe since 1995. Though not an ordained priest by then, he dedicated his life to helping the refugees entering Europe by boat from North Africa. He uses satellite phone, which makes his contacts with the refugees easier; as he can access them directly in the middle of the Mediterranean Sea as they make dangerous attempts of crossing into Europe.
In desperation, many emigrants attempt to cross the Mediterranean in rickety wooden boats or inflatables. Many of the refugees run away from the Libyan detention centres, known as Kufra, where they undergo a lot of torture. Unfortunately many of the victims who contacted Fr. Mussie lost their lives while in detention centres”.