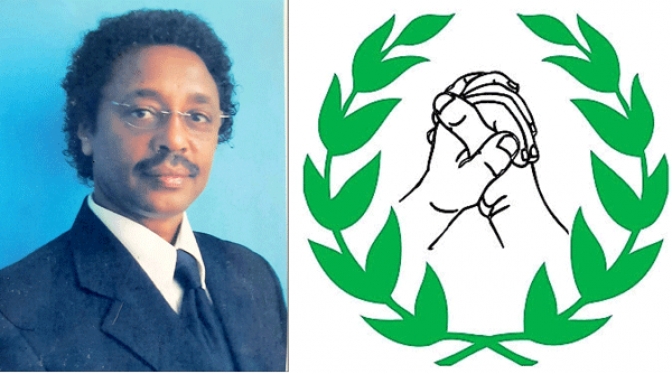 At its first meeting held within the halls of the Eritrea Festival launched on 2 August inside the University of Bockenheim,  the Central Council of the unified Eritrean People’s Democratic Party (EPDP), elected Mr. Tesfai Woldemichael (Degiga) as the new chairman. Mr. Tesfai Degiga is one of the most respected veterans of the prolonged national struggle for Eritrea’s liberation and democratic future. At the end of the meeting, the council elected the list of his 8 candidates  for the new  executive committee.

The newly elected 35-person Central Council with five more non-voting members met Friday afternoon chaired by a senior party member, Mr. Woldeyesus Ammar, and elected him with acclamation and unlimited delight because their sole candidate for chairmanship has been  highly reluctant to take the post for personal reasons.

In his acceptance speech, the designated EPDP chairman thanked all council members for the trust they had in him and he in turn expected continued hard work from every party member.

Newly elected Central Council at its first meeting in Frankfurt

The Central Council itself was elected at the end of the 3rd and Unity Congress of the EPDP and the Eritrean National Salvation/Hidri, which was held between 29 July and 1st August in Wiesbaden near Frankfurt, Germany. The sister organizations agreed at the congress to continue calling the unified party as EPDP.

Speaking at the end of the election process the outgoing chairmen of the converging organizations, Messrs Kiflezghi Ghebremedhin and Menghesteab Asmerom, warmly thanked the candidate for his acceptance of the challenging post at this critical moment in the uphill struggle for democratic change in Eritrea.

At the end of the meeting late in the evening, the Council adopted a list of senior party cadres as Administrative Committee of the Chair Office.