The Globe talked to several victims of sexual violence by Tigrayan forces in Geregera. The village is about 100 kilometres southwest of Lalibela, a popular tourist town in the Amhara region, famous for its ancient churches hewn into the sides of mountains. The interviews were obtained independently, without the involvement of government officials. To ensure the security of the victims, The Globe is not revealing their identities. The survivors described how some Tigrayan soldiers went from village to village and raped the women and girls they found, until they retreated from the area in mid-September. 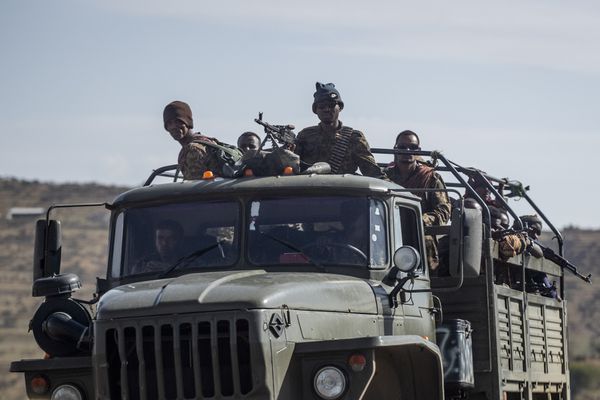 Ethiopian government soldiers ride in the back of a truck on a road near Agula, north of Mekele, in the Tigray region of northern Ethiopia on May 8.BEN CURTIS/THE ASSOCIATED PRESS

As Tigrayan fighters march relentlessly closer to Addis Ababa in a military offensive that threatens to topple the Ethiopian government, disturbing evidence of brutal abuses is emerging from some of the towns and villages captured by the rebels.

The evidence, gathered by human-rights researchers and The Globe and Mail, suggests that Tigrayan soldiers have perpetrated the same kind of sexual violence documented among the Ethiopian and Eritrean troops the rebels have been fighting for the past year.

The Tigrayan military advances, sometimes in co-operation with Oromo insurgents, have already led to the evacuation of many foreign diplomats and United Nations staff from the Ethiopian capital.

The rebels are now reported to be about 220 kilometres from Addis Ababa – possibly closer. Many Western governments, including Canada’s, have urged their citizens to leave the country as soon as possible because of the risk of fighting in the capital.

To corroborate the reports of rape and sexual assault, and to see if such abuses have spread to other regions, The Globe interviewed women and girls in the village of Geregera, in the Amhara region.

The village was captured by Tigrayan troops in late August. Soon afterward, four Tigrayan soldiers broke into the home of a 12-year-old girl.

“They ordered me to take off my clothes,” the girl told The Globe. “When I refused, one of them slapped me in the face and stripped off my clothes. My father tried to defend me, but they beat him and threatened to kill us all.”

For hours, until she lost consciousness, the soldiers took turn raping her, she said. She recounted the attack with difficulty, speaking between sobs and long pauses. Her mother gave permission and was present for the interview.

“They raped me in front of my father,” the girl said. “They would get angry and beat me when I tried to fight back, so I stopped. I was so scared they would kill me and my father.”

The Globe investigation found that the girl was one of many to suffer sexual assaults by Tigrayan troops. But all sides in the worsening war have been guilty of similar attacks.

The war began in November, 2020, when the Ethiopian military, supported by Eritrean troops, launched a massive offensive in northern Ethiopia’s Tigray region. The region had defied the federal government by demanding autonomy and refusing to cancel a scheduled election last year.

Almost from the beginning of the war, human-rights researchers and United Nations agencies have documented the use of sexual violence as a weapon of war. The earliest reports emerged in Tigray in late 2020, revealing frequent sexual assaults by Ethiopian and Eritrean troops, along with Amhara militias, as part of their offensive to gain control of the region.

More recently, the war has expanded to new regions, including Amhara, after Tigrayan forces launched a counteroffensive. After regaining control of much of their home region, the Tigrayans have advanced into Amhara and closer to Addis Ababa – reportedly exhibiting a similar pattern of sexual violence along the way.

Many of the victims have been unable to get medical treatment or mental health care, largely because of the fighting, the growing number of military checkpoints, the shutdown of electricity and telecommunications, the destruction of health centres and a government blockade of humanitarian supplies to some regions.

In the village of Geregera, the 12-year-old girl has received no medical treatment for her injuries, nor any other health support, not just because of the social stigma that surrounds sexual assaults but because of the shortage of health facilities in the area. Almost three months after the brutal attack, some of her internal injuries persist – she still suffers from urinary incontinence.

The Globe talked to several victims of sexual violence by Tigrayan forces in Geregera. The village is about 100 kilometres southwest of Lalibela, a popular tourist town in the Amhara region, famous for its ancient churches hewn into the sides of mountains.

The interviews were obtained independently, without the involvement of government officials. To ensure the security of the victims, The Globe is not revealing their identities.

The survivors described how some Tigrayan soldiers went from village to village and raped the women and girls they found, until they retreated from the area in mid-September.

Zewde, a mother of two in Geregera, said her 14-year-old daughter was among those who were gang-raped by Tigrayan troops.

On the afternoon of Aug. 28, she said, her daughter disappeared. A group of villagers found the girl dumped in a nearby forest and carried her home.

“She was bleeding and unconscious,” Zewde told The Globe tearfully. “She was scratched and beaten.”

Her daughter, still in shock, could barely speak for days. Only weeks later did Zewde learn what had happened, although her daughter is still uncertain of how many soldiers were involved in the attack.

“She has nightmares,” Zewde said. “Sometimes she counts them as five. Other times she said they were six. But she is certain about one thing: Her abusers were uniformed fighters from Tigray.”

Others from the same village gave similar accounts to The Globe. None of the victims, they said, had received any medical or psychological help after the soldiers attacked them.

“At first they said they would not harm the women and that their targets are only armed men,” said Meteke, one of the villagers. “But afterwards they raped and tortured our girls mercilessly.”

Meteke said she knows several of the victims, but most would not talk about their ordeals because of the stigma surrounding sexual assault.

The Globe could not independently verify the number of cases in the village. But separate witnesses estimated that dozens of women and girls, at least, were raped by Tigrayan fighters.

The Globe contacted Getachew Reda, spokesperson for the Tigray People’s Liberation Front, the main Tigrayan fighting force, to ask about the allegations of sexual violence in Geregera. He did not respond to the message.

Amnesty International, in a report on Nov. 9, documented how 16 women were raped in mid-August by Tigrayan fighters who had captured another Amhara town, Nifas Mewcha, about 50 kilometres from Geregera.

The women told Amnesty that they were raped at gunpoint, robbed, physically assaulted and subjected to dehumanizing verbal attacks during the nine days when the Tigrayan soldiers controlled the town. The attacks amounted to war crimes, Amnesty said.

Fourteen of the 16 told Amnesty that they were gang-raped. Some said the Tigrayans told them that the rapes were revenge for earlier rapes of Tigrayan women by Ethiopian soldiers.

Almost all of the women had suffered physical and mental health problems as a result of the attacks, but most were unable to receive any health care because the Tigrayan soldiers had damaged and looted the town’s hospital and health clinic, the report said.

An independent humanitarian agency that normally provides health services told Amnesty that it cannot enter the area because of security concerns caused by the government’s verbal attacks on relief agencies.

A joint investigation by the Ethiopian Human Rights Commission and the UN human rights office found strong evidence of widespread sexual assaults by all sides in the war in northern Ethiopia. It found a continuous rise in the number of survivors visiting hospitals to seek treatment for sexual and gender-based violence, with more than 1,320 hospital visits in Tigray alone in the first six months of the war.

The joint investigation, in a report released on Nov. 3, found that Ethiopian, Eritrean and Tigrayan troops were implicated in multiple reports of gang rape in more than a dozen cities and towns. The assaults were so widespread and systematic that they could be defined as crimes against humanity, it said.

“Some of the reported accounts of rape were characterized by appalling levels of brutality,” the report said. “Acts of rape were frequently intended to degrade and dehumanize an entire ethnic group.”

Some governments and activists are proposing an international convention to make sexual violence as universally prohibited in wars as chemical weapons or land mines.

“It is grotesque that sexual violence and rape is used as a weapon of war, and it’s used to exercise power over women,” British Foreign Secretary Liz Truss said in a speech last week.

She cited a study in South Sudan that found that about a third of all women had suffered conflict-related sexual violence.

Tweet
Last modified on Tuesday, 30 November 2021 09:59
More in this category: « Ethiopia’s Civil War Fueled by Weapons from UN’s Big Powers British government ducks question about the plight of Tigrayans arrested and abused in Ethiopia »
back to top