The Nobel committee should resign over the atrocities in Tigray

Members of the body that awarded the 2019 peace prize to Ethiopia’s premier, Abiy Ahmed, should all depart in protest 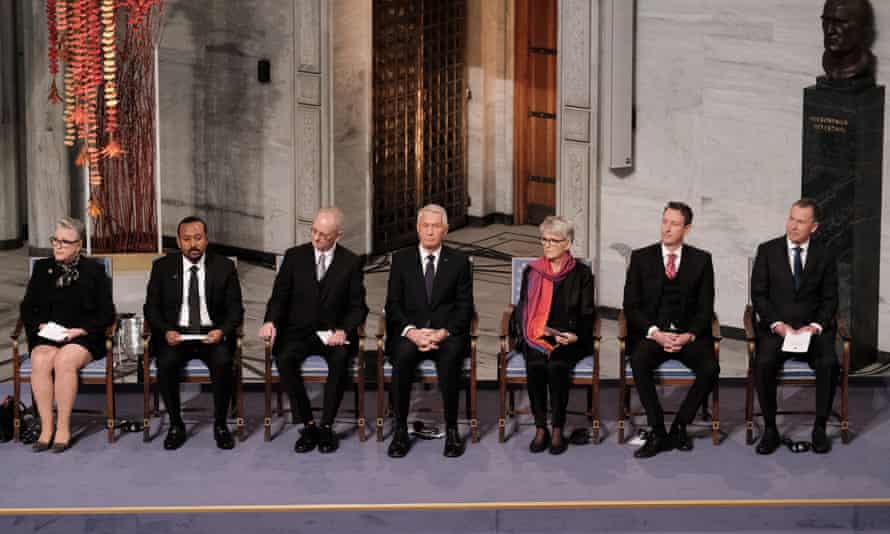 Ethiopia’s prime minister and 2019 Nobel peace prize laureate Abiy Ahmed, second from left, with members of the Norwegian awarding committee at the ceremony in 2018 in Oslo. Photograph: Erik Valestrand/Getty
Global development is supported by

The war on Tigray in Ethiopia has been going on for months. Thousands of people have been killed and wounded, women and girls have been raped by military forces, and more than 2 million citizens have been forced out of their homes. Prime minister and Nobel peace prize laureate Abiy Ahmed stated that a nation on its way to “prosperity” would experience a few “rough patches” that would create “blisters”. This is how he rationalised what is alleged to be a genocide.

Nobel committee members have individual responsibility for awarding the 2019 peace prize to Abiy Ahmed, accused of waging the war in Tigray. The members should thus collectively resign their honourable positions at the Nobel committee in protest and defiance.

The committee justified awarding the Nobel to Ethiopia’s premier for his “efforts to achieve peace and international cooperation, and in particular for his decisive initiative to resolve the border conflict with neighbouring Eritrea”. Today, Eritrean forces, along with Ethiopia’s federal and Amhara regional state forces are accused of war crimes and crimes against humanity in what Abiy characterises as a “law enforcement operation” in Tigray.

Numerous massacres of civilians have been revealed, and rape of women and girls has been systematically carried out

The war began last November, when federal soldiers entered Tigray alongside Eritrean forces, claiming the objective was to arrest the elected regional government and leaders of the Tigray People’s Liberation Front party (TPLF) for rebellion. The Tigray leadership withdrew from the regional capital, Mekelle, into the mountains, with thousands of combat-ready troops. It was clear from the outset that war was inevitable, as Tigrayans would not submit to the centralising policies of Abiy, which they believe undermine their constitutionally enshrined autonomy.

The campaign has become increasingly repugnant. The US has criticised Abiy for ethnic cleansing. Numerous massacres of civilians have been revealed, and rape of women and girls has been systematically carried out to “cleanse the blood line”, as soldiers have reportedly said, and break spirits. Civil infrastructure, such as hospitals, water facilities, schools and universities have been direct targets of bombings and looting, with the aim to destroy capacity to govern.

Even worse is the humanitarian consequence. Today, 5.2 million Tigrayans, about 85% of the region’s population, need aid to survive, but it is not reaching them. Food and emergency assistance from the UN and international organisations is obstructed by federal red tape and Ethiopian and Eritrean soldiers. Hundreds of thousands are in danger of dying from starvation this summer. We may soon again see images of mass death in Tigray, similar to those from the famine that took place during the Ethiopian civil war and inspired the Live Aid concert in 1985.

Human rights experts believe there is reason to declare genocide in Tigray, when analysing the political intentions behind the systematic mass murders of civilians, sexual violence and more. The patriarch of the Ethiopian Orthodox church has said that the government is carrying out a genocide. The final legal conclusion must however be for a future international criminal tribunal.

What then is the responsibility of the Nobel committee towards someone who uses the prize to legitimise genocidal warfare against his own people? Did they undertake a comprehensive risk assessment before giving the prize to an incumbent prime minister who was not democratically elected in a country that has always been an authoritarian state? Or is this, in hindsight, something the committee could not have foreseen?

Last year, the Nobel committee came out in defence of the laureate, reasserting its position on the prize

Already, in early 2019, the reforms in Ethiopia and the peace process with Eritrea were known to have lost momentum. Liberal political reforms in the country were backsliding. Some also warned that the peace prize itself could destabilise rather than consolidate the region.

After the war began, I had a call from a high-ranking Ethiopian official: “I will always hold the Nobel committee responsible for destroying our country,” he said. “After Abiy received the peace prize, he viewed this as a recognition of his politics and would no longer listen to objections or the dangers of recentralised power in Ethiopia.”

There is international criticism of Abiy’s candidature and the committee’s “non-stance” on any crimes against humanity by military forces under the command of a Nobel laureate. But the committee has stayed silent, carrying on a century’s tradition of refusing to discuss the judging process. Last year, in reaction to Abiy’s decision to postpone the 2020 elections indefinitely, the Nobel committee came out in defence of the laureate, reasserting its position on the prize. Now, after the outbreak of war, members of the committee remain disinclined to discuss their original assessment.

Initiatives by Ethiopian diaspora organisations to hold the Nobel committee legally liable for the award’s consequences have further damaged the reputation of the Nobel prize.

On the guidelines enshrined in Nobel rules is that once a prize is awarded, it cannot be withdrawn. So how could the committee express its condemnation of the war and the politics of Abiy should it wish to? All members have an individual responsibility – it is not officially known whether any voted against. They should therefore acknowledge this, collectively resign, and let the Norwegian parliament appoint a new committee.

As a collective action, it would be perceived as taking responsibility for the error – and as a protest against the war.

At the same time, the Nobel Institute should upgrade its expertise, undertake comprehensive risk assessments and analyse relevant conflicts and contexts on which awards are based. It seems clear that procedures failed in awarding Abiy the prize.

In appointing a new committee, Norway’s political parties must drop the tradition to nominate retired politicians. This would provide the much-needed arm’s length between the prize and the Norwegian political elite. International members should be brought in, with expertise in what the prize is actually about: war and peace, international law, human rights. The Nobel name carries international weight and a committee with world-class capabilities should protect it.