2014 Frankfurt Eritrean Festival, the Beginning of a Game Changer against the Destruction of Justice and Democracy in Eritrea 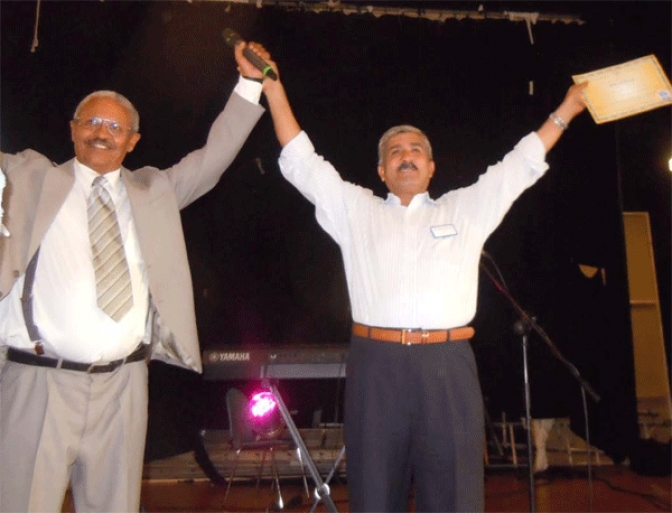 All the campaign by the PFDJ and its enablers, which was designed to preempt, silence the voices of change, and efface the importance of the 2014 Frankfurt Eritrean festival did not work. In fact, the campaign had a backfire effect. In defying the maneuvers, misinformation, and lies launched by the PFDJ regime and by those who parrot and perpetuate its ruthless police state, Eritreans of all stripes and hues showed up in the festival and raised hell to the PFDJ regime.

The fact is and unlike previous festivals, this time, the resurgence and emergence of new forces to the festival was an assertion that the momentum is shifting, and that the PFDJ holds nothing, but zilch legitimacy in Eritrea; and that the festival’s subsequent call for a united and immediate awakening against the PFDJ injustice, subjugation, and systemic violation of our people’s basic human rights over the last two decades was one that must be understood as a powerful and a soul-searching move that cannot be deterred any longer from igniting the revolutionary fire against the PFDJ misrule in our country.

From the seminar that focused on the EMDHR’s turning point document produced in May 2014 in Pretoria, South Africa workshop to the solidarity messages delivered by a number of Eritrean political groups and civic society organizations, and to the heart wrenching presentation accompanied by video footages by Mr. Hamdy Ahmed Osman el-Azazy (an Egyptian human rights activist) on the unspeakable violent acts, abuses, and atrocities being perpetuated on Eritrean youth, women, and children refugees by human traffickers in the Sinai Peninsula, the festival deliberated and went beyond a mere formality and called for a definitive and concerted revolt through transformation against the PFDJ police state, which considers the lives of Eritrean people as exploitable and expendable.

In a similar vein, the festival heard a keynote address by Mr. Mengisteab Asmerom, the leader of the Eritrean People’s Democratic Party (EPDP). The central theme of Mr. Mengisteab’s address was a call anchored on the urgent need to create a workable platform among Eritrean opposition forces that should translate into a real unity, inclusiveness, meaningful strategic direction, and empowerment and participation of Eritrean people in the struggle against the PFDJ regime, and establishing a strategic and viable network here in the Diaspora and inside our homeland through defeating the current standstill within and among the various Eritrean opposition forces and their civil society organizations. In order to do that the chairman underpins in his speech that the opposition must shift the paradigm by transcending the unity crisis, mutual animosity/partisanship, and the belligerent political practices that have become not only indefensible in our political public discourse at a time when our country stands at a crossroads between survival and death, but also that has been become a multiplier of roadblocks that stand in the way of the bigger objective, and that continues to deprive us from building an enduring and formidable democratic opposition that can free our people from the jaws of the pariahs who are increasingly pushing the country to the edge of an abyss, partly by inoculating a perpetual fear in the public’s mind on the pretext of foreign forces/conspiracies.

The Frankfurt festival of this year had also a new determination and high spirit of a no return by the youth and women participants/speakers (Network of Eritrean Women, Association of Eritrean Women’s Initiative in Germany) who echoed the grim situation of our country under Issais’ regime: how the regime is ravaging and wrecking the country to death, how it is dismantling the fabric and traditional institutions of the Eritrean society irreversibly, how it is hijacking the destiny of future generations…etc. The crux of their message is that Eritrea’s existence is under threat and that it is time we rise up all collectively and stop such a slow death of our country that we paid unequal price to secure it. Their message was equally critical on the failings and recurrent faltering of the Eritrean opposition forces in their quest to work in unison against the PFDJ regime, whether political groups or civil society organizations. EPDP deeply shares such a critique and reaffirms its long standing principle of genuine unity for there is no better path to salvage the country and its people than by forging unity and struggling collectively for democracy and freedom. In this, EPDP will continue to keep the unity agenda at the forefront of its struggle.

In sum, the crucial message of the festival was one and undivided that Eritrea is in a 23-year nation building crisis under PFDJ tyrannical régime, that Issais is sitting on the top of a country heading to uncertainty as thousands of its productive nationals continue to flee, and as hundreds of thousands of others are already purged, tortured to death or are languishing in prison. On the Eritrean refugees, Mr. Hamdy, a devoted Egyptian human rights activist, told the festival horrific stories of Eritrean refugees in ways most people haven’t heard them before, stories that shivers one’s soul, stories that tell how much Eritrean people’s humanity is reduced to nothing. On the opposition side, the festival unmistakably voiced that the opposition still continues to be besieged by a recurrent division; making holes and bruises in the body politics of the democratic struggle, which has been and continues to be undermining the cause of the democratic opposition as well as alienating Eritrean people from the struggle, creating a wide open field in which the PFDJ tyranny can thrive and extend its life in perpetuity. The democratic opposition must adopt a drastic new approach; we cannot do things the way they have been done over the last two decades, and we must address the unity crisis, declared the festival. And this is the beginning of a game changer.

Tweet
Last modified on Monday, 01 September 2014 07:32
More in this category: « ባህሊ ኣብ ፈስቲቫል ኤርትራ 2014 ፍራንክፎርት Constitution or No Constitution: Issais Afeworki is Gearing up to Become a Tyrant for Life »
back to top