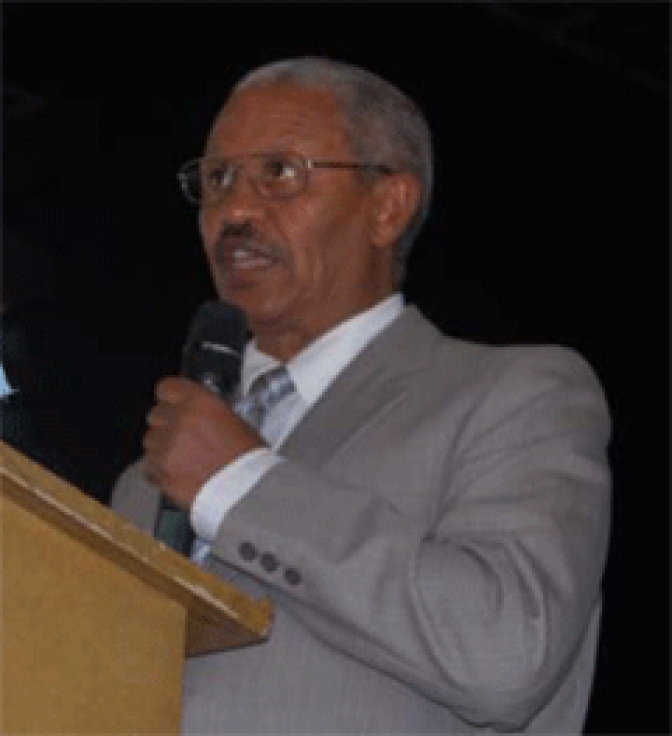 In his keynote address at the Eritrea Festival 2014 in Frankfurt on 9 August, 2014, Mr. Menghisteab Asmerom, chairman of the Eritrean People’s Democratic Party (EPDP), reminded all compatriots opposed to the regime that change could not be achieved until now because of lack of sufficient “political will and courage” and listed the challenges that needed to be addressed now.

resolve to continue the struggle to remove the cause of all these tragedies.

Mr. Menghisteab Asmerom regretted the fragmented state of affairs of the forces opposed to the regime in Eritrea and called for an urgent action on the challenging questions that included the following:

The festival hall included distinguished host country officials and distinguished invited guests that the EPDP chairman wished to welcome each and every one of them by calling their names and their organizations. The eminent guests represented the following institutions and organizations:

The EPDP chairman also extended his and his party’s “warm welcome and heartfelt salutations” to all attending Eritrea Festival 2014 in Frankfurt, and commended the Eritrean Democratic Party (EDA) of Germany and EPDP branches in Europe for the successful organization of the festival. (Excerpts from the speech are given below).

Speaking about the situation in Eritrea, he said the ever worsening condition in Eritrea has reached the extent of critical absence of daily bread, water, and electric power to every household in the country. Lately, the capital city of Asmara was in total darkness for over a week, and he said this manifests the degree of deterioration in the condition of life in the country. The galloping inflation and the ever weakening exchange rate of the local currency add to the misery of the people, he said. It is hard to talk about the presence of any health service in PFDJ’s Eritrea except for very few in high posts or the neuve riche who can get it by travelling to the Sudan, he added.

He said the new generation in Eritrea is condemned to lose all life opportunity due to the forced labour misnamed ‘national service’. Many young people who could not stand the bitterness of life at home have taken the most dangerous risks that finally made them victims of inhumane imprisonment, torture, rape, displacement, kidnap, unwanted pregnancy and, in many cases, even death. Nowadays, Eritreans are being sold and traded just like chattel, and that their organs are being harvested. This was unheard of in the history of the people, he added.

The Chairman stated that since the 2013 Eritrea Festival in Frankfurt, the Lampedusa misfortune was one of the tragedies that befell our people. While the entire world, including the UN system, the AU, EU, world churches and human rights organizations, deeply mourned the loss at Lampedusa, the callous regime in Asmara described the Eritrean victims as ‘African migrants’ fleeing from their homes.

The False Propaganda from Asmara

The EPDP chairman also exposed the utter fabrications of the Asmara regime in the following terms: In a failed attempt to cover up the ugly situation Eritrea and its people are subjected to, the PFDJ regime vainly tries to say that Eritrea is making ‘economic progress’, that it implemented most of the millennium targets, that youth are receiving standard education, the national carrier is flying to Sanaa, Jedah etc. In a similar vain effort to make Eritreans feel ‘good’, the propaganda machinery of the regime spends much time and resources in exaggerating the miseries in other countries. But these efforts can hardly mislead the people except to very few gullible listeners.

This is a regime that has betrayed the martyrdom of so many gallant fighters and promises of our revolution, and no one can anymore expect any good from it. The solution is in the hands of us all fighting for peace, justice, democracy and progress.

As the pastoral letter of four Eritrean Catholic bishops put it, it is time for all of us to ask where and in what situation our brothers and sisters are, where our country are and our people are. Without pointing fingers at others, each and every one of us is expected to shoulder the responsibility of doing what he/she can to reclaim our new but fast failing state and its people, the EPDP chairman stressed.

On Efforts by EPDP

Mr. Menghisteab Asmerom said EPDP is a party that spends every single day of its existence trying to do what it can for Eritrea and its distressed people. As part of its advocacy on behalf of Eritrean refugees, the party sends numerous memoranda and holds meetings with various UN agencies, the EU, the AU, fraternal parties and countries as well as with human rights organizations and draws their attention to what is happening to so many Eritreans in the Horn of Africa region, in the Middle East and other corners of the world.

Members of the party take part in any demonstration and civic action organized in any corner of the world. EPDP members are second to none in any contribution needed to help Eritreans in great need. To mention only a few, what members of the party have been and are still doing to help disabled veterans and to educate refugee children at Wad-Sherifey in East Sudan are commendable examples.

The solid relations forged with the Socialist International as well as its membership in the newly formed Progressive Alliance are worthy inputs to the renown and growth of the Eritrean struggle for change and democratization.

Likewise, the EPDP, which is committed to a people-centered struggle and the eventual sovereign power of the people, has been making all possible efforts to unify at minimum programme the ranks of all forces opposed to the dictatorial regime in Asmara. Empowerment of youth and women’s groupings and other civil society organizations is among the priority aims pursued by the party.

The EPDP chairman believed that the forces opposed to the regime in Asmara are growing by the day. However, he regretted the perennial fragmentation that continued to affect their capabilities.

The urgent task for all pro-democracy forces is to remove the dictatorial regime and replace it by a system that can bring about peace, justice, democracy and progress in the country. He said it is good that all justice seeking forces are by now aware the weaknesses that hitherto crippled the struggle. The desired solution has delayed because of lack of political will and courage.

He concluded by urging for a common platform for a joint struggle and by listing the challenging questions mentioned earlier and wishing success to the Festival.