Ethiopia’s PM has gone to the battlefront: State-affiliated media

Abiy Ahmed on Tuesday promised to lead his country’s army ‘from the battlefront’ after Tigrayan rebels threatened to march on Addis Ababa. 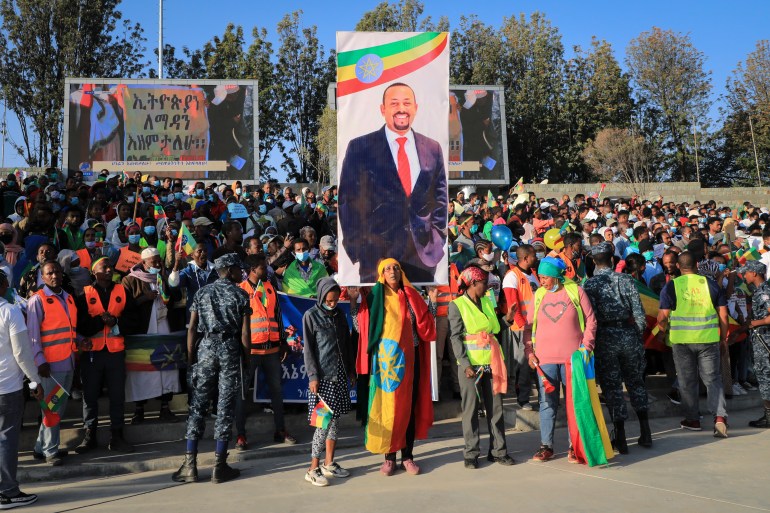 Ethiopia’s Prime Minister Abiy Ahmed has gone to the front lines to lead his troops in the battle against forces from the northern Tigray region, state-affiliated media reported.

After more than a century, Ethiopian stolen artefacts return home

Other senior government officials have also immediately responded to the call made by the prime Minister to save Ethiopia and joined the campaign, he added.

State media has shown no images of Abiy, a 45-year-old former soldier and winner of the 2019 Nobel Peace Prize, at the battlefront. The government has not disclosed his location but a spokesman said he had arrived at the front on Tuesday and was joined by other government officials who heeded the call to “save Ethiopia”.

“The time has come to lead the country with sacrifice,” Abiy had said in a Twitter post late on Monday. “Those who want to be among the Ethiopian children who will be hailed by history, rise up for your country today. Let’s meet at the battlefront.”

Northern Ethiopia has been racked by conflict since November 2020 when Abiy sent troops into the Tigray region to topple the Tigray People’s Liberation Front (TPLF) after months of tensions with the region’s governing party. The TPLF had controlled national politics for three decades until Abiy came to power in 2018.

Abiy promised a swift victory, but by late June the TPLF had regrouped and retaken most of Tigray, including its capital, Mekelle. Since then, the Tigrayan forces have pushed into the neighbouring Afar and Amhara regions and this week claimed control of Shewa Robit, just 220km (135 miles) northeast of the capital, Addis Ababa, by road.

The Tigrayan forces and their allies have threatened to march on Addis Ababa. They have also been fighting fiercely to try to cut a transport corridor linking landlocked Ethiopia with the region’s main port, Djibouti.

Much of northern Ethiopia is under a communications blackout and access for journalists is restricted, making battlefield claims difficult to corroborate.

Later on Wednesday, during a joint news conference with Colombia’s President Ivan Duque, UN Secretary General Antonio Guterres called for an end to the fighting.

“The peace process in Colombia today inspires me to make an urgent call to the protagonists of the conflict in Ethiopia for an unconditional and immediate ceasefire,” Guterres said, referring to the 2016 peace agreement between the Colombian government and FARC rebels.

Mustafa Ali, co-founder and chairman of Horn International Institute for Strategic Studies, said Abiy’s decision to move to the war front was a “big gamble”.

“Aby is risking his life and he’s also risking the lives of those who are going to be alongside himself,” Ali told Al Jazeera.

“The calculation here from Aby’s administration is because … that many armed grounds are converging around Addis Ababa, he sees it fit as part of a psychological operation to inspire other Ethiopians to join the [national army] and fight this war and push back the Tigrayans,” he said.

The prospect of the country breaking apart has alarmed both Ethiopians and observers who fear what would happen to the often turbulent region at large. Several countries including the United States, the United Kingdom, France, Germany and Turkey have told their citizens to leave immediately.

“Ethiopia is a huge country; if it descends into anarchy then we are going have a huge problem of stability in the entire Horn of Africa,” Ali warned.

On Wednesday, hundreds of new army recruits took part in a ceremony held in their honour in the Kolfe district of Addis Ababa.

“I was amazed when I heard” Abiy planned to join soldiers in the field, one of the recruits, 42-year-old driver Tesfaye Sherefa, told AFP news agency.

“When a leader leaves his chair… and his throne it is to rescue his country. His focus is not to live, but to rescue this country, and I sobbed when he said ‘follow me’ and went to the front line.”

The marathoner gained political prominence by raising and crossing his arms as he finished the marathon at the 2016 Olympics in Rio de Janeiro – a gesture of solidarity with fellow ethnic Oromos killed while protesting against abuses committed during nearly 27 years of TPLF rule.

In the state media interview which aired Wednesday, Feyisa said he would relish the chance to fight the TPLF himself.

“When a country is violated, there is no way I will stand by and just watch,” he said.

A separate state media report quoted Ethiopia’s most famous distance-running champion, Haile Gebrselassie, as saying he, too, would fight at the front.

“What would you do when the existence of a country is at stake? You just put down everything. Alas, nothing will bind you. I am sorry!” Haile told Reuters news agency on Wednesday.

In an interview in his office in Addis Ababa, where he runs more than a dozen companies engaged in hospitality, real estate, agriculture and education, Haile, who set 27 long distance running records, spoke of the role he was willing to play in the war.

SOURCE: AL JAZEERA AND NEWS AGENCIES
Tweet
Last modified on Thursday, 25 November 2021 13:02
More in this category: « Eritreans among the thousands rounded up in Ethiopia as the war closes in on Addis Ethiopia’s Civil War Fueled by Weapons from UN’s Big Powers »
back to top