“Senior Western officials broadly confirmed Tigrayan accounts that the assault, which had been anticipated for weeks, started in the Amhara region, which borders Tigray to the south. “ 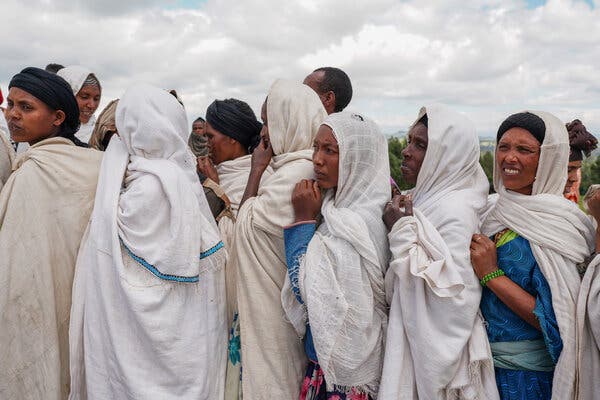 Lining up for food aid in the Amhara region of northern Ethiopia on Sunday.Credit…Jemal Countess/Getty Images

NAIROBI, Kenya — The conflict in northern Ethiopia has escalated sharply in recent days, as Ethiopian forces began a sweeping offensive in a bid to reverse recent gains by Tigrayan rebels, Western officials and Tigrayan leaders said.

U.N. officials said the attack will deepen the humanitarian crisis in a region that is plunging into the world’s worst famine in a decade. With the Ethiopian government blocking aid shipments, some starving Tigrayans are eating leaves to survive.

Senior Western officials broadly confirmed Tigrayan accounts that the assault, which had been anticipated for weeks, started in the Amhara region, which borders Tigray to the south. But beyond that, it is hard to get a clear picture of the situation.

A strict communications blackout imposed by the government means few details about the fighting can be independently confirmed. Prime Minister Abiy Ahmed, who was sworn in for a second term last week, has declined to comment in recent days.

His spokeswoman did not respond to a request for comment on Tuesday.

Speaking by phone, Gen. Tsadkan Gebretensae, a member of the central command of the Tigray forces and its leading strategist, said Ethiopian forces had begun the military operation on Friday with a bombardment of Tigrayan positions using warplanes, artillery and drones.

On Monday, the Ethiopians switched to a ground offensive led by thousands of fighters, to be met by a Tigrayan counteroffensive, he said.

“The enemy has been preparing for months, and so have we,” said General Tsadkan, who previously commanded Ethiopia’s armed forces for a decade. He predicted the coming battle would be a “decisive moment” for the country.

“The ramifications will be military, political and diplomatic,” he said. “I don’t think this will be a protracted fight — a matter of days, most probably weeks.” 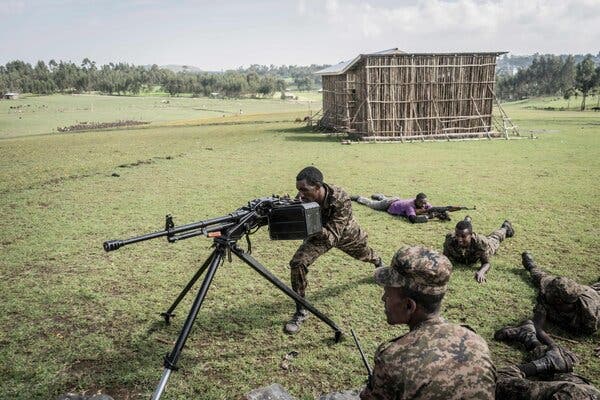 Ethiopian soldiers training in Dabat last month. Government forces have been preparing for the recent move against the Tigrayan rebels for months.Credit…Amanuel Sileshi/Agence France-Presse — Getty Images

For Mr. Abiy, winner of the 2019 Nobel Peace Prize, the offensive is an effort to wrest control of a brutal 11-month war that has ruined his reputation as a peacemaker and slipped beyond his grip as the fighting spread to new areas in recent months.

Mr. Abiy has appeared increasingly isolated from international support as the United States threatens him with the prospect of sanctions, and he clashes with the U.N. leadership. Only a few African leaders have continued to support him.

This month, Ethiopia expelled seven senior U.N. officials it accused of “meddling” in the nation’s internal affairs and diverting aid to the Tigrayan rebels. The U.N. Secretary General Antonio Guterres denied those charges in unusually sharp language, telling Mr. Abiy the expulsions had no legal basis.

Likening the situation to the devastating Somalia famine of 2011, Mr. Guterres said he warned Mr. Abiy that Ethiopian restrictions on the delivery of aid had created a humanitarian crisis that was “spiraling out of control.”

Over five million Tigrayans urgently need relief aid, and at least 400,000 are in famine-like conditions, the U.N. says. But barely one-tenth of required aid has reached them because Ethiopia has blocked the routes into the region, officials said.

The Biden administration has tried to force Mr. Abiy and the Tigrayans into peace talks by threatening sanctions against “officials and entities” who block humanitarian aid and refuse to stop fighting.

With his latest attack, however, Mr. Abiy seems to be gambling that he can prevail using force.

Western officials said the Ethiopian leader had been preparing the offensive for months. He amassed new weapons from foreign suppliers and recruited tens of thousands of young Ethiopians to help fight Tigrayan forces he has described as “cancer” and “weeds.” 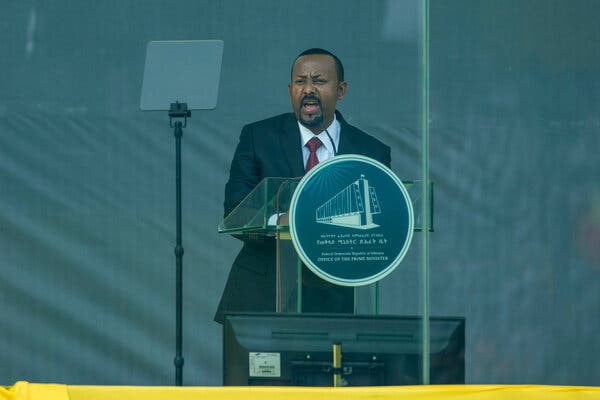 Prime Minister Abiy Ahmed during his inauguration ceremony in Addis Ababa last week, where he was sworn in for a second five-year term.Credit…Mulugeta Ayene/Associated Press

One Western official said Mr. Abiy had acquired new drones built in Iran, Turkey and China, although it is unclear who supplied them to Ethiopia. Websites that track international air traffic have recorded dozens of cargo flights from the United Arab Emirates, and a handful from Iran, into Ethiopian air force bases in the past six weeks.

Tigrayan leaders have accused the U.A.E. of sending armed drones to help Mr. Abiy during the early weeks of the war last November; Emirati officials have refused to comment. Airstrikes took out most of the Tigrayan artillery and forced its troops to retreat into the remote countryside.

A more consequential question now is whether Eritrea will again rally to Mr. Abiy’s side. Eritrean troops offered crucial support in the first phase of the war, until June, and faced many of the worst accusations of atrocities against civilians. The Eritreans are currently occupying Humera, a town in western Tigray, and some have deployed to Amhara, two western officials said.

But it’s unclear if they are participating in the latest fighting.

Tigrayan forces scored a series of surprise victories that forced Ethiopian forces out of Tigray. In July, the Tigrayans pushed into the Amhara region, where the fighting has been centered ever since.

A long-running dispute between Amhara and Tigray over a swath of disputed land drew Amhara militias into the fight against Tigray last November. The Tigrayans say those fighters are also participating in the latest offensives, along with regular Ethiopian troops and young men from across Ethiopia drawn by Mr. Abiy’s appeal for recruits during the summer.

But General Tsadkan, the Tigrayan commander, said he considered the autocratic leader of Eritrea, Isaias Afwerki, who is an old foe of the Tigrayans, as his greatest threat.

“Isaias and his army are the major spoiler in the region,” he said. “If the international community is earnestly looking for a peaceful solution, a settlement will not happen without taking care of Isaias.” 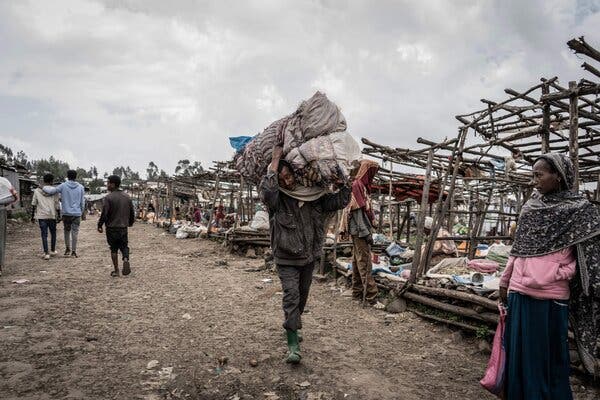 Both sides face intense pressures. The Tigrayans, surrounded by enemies, risk running out of supplies soon. Mr. Abiy is wrestling with a steep economic slide that has led to soaring food prices and foreign currency shortages, which American sanctions could soon make worse.

Ethiopian Airlines, Africa’s biggest airline and Ethiopia’s flagship economic success, last week denied a report on CNN that its aircraft had been used to ship weapons and soldiers for the war in Tigray.

Some African leaders are standing by Mr. Abiy. Six heads of state, mostly from the region, attended his inauguration celebrations in Addis Ababa last week. But several of the congratulatory speeches included expressions of growing concern, and urged Mr. Abiy toward peace talks.

“Ethiopia is our mother,” said President Uhuru Kenyatta of Kenya. “If our mother is not at peace, neither can the family be at peace.”

The criticism of Mr. Abiy in the West is growing increasingly strident. Last week an essay by Mark Lowcock, a former British diplomat and until recently the U.N.’s humanitarian chief, accused Mr. Abiy of trying to starve the people of Tigray “either into subjugation or out of existence” and warned he risked causing his country to collapse.

“Abiy’s game plan cannot work,” Mr. Lowcock wrote, citing what he said was a growing expert consensus. “If he tries and fails to destroy Tigray, he will be destroyed himself. If he succeeds, he will never survive the backlash that will follow.”