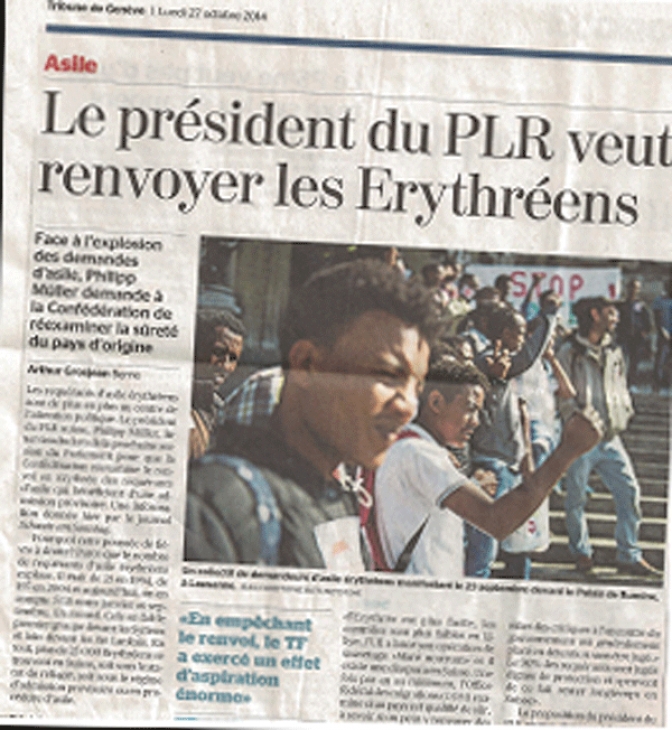 According to a daily Swiss newspaper of 27 October, Eritrean asylum seekers have become the centre of political attention in Switzerland, and as such, the president of the Swiss Liberal-Radical Party (PLR) is intending to

propose to the upcoming parliamentary debate the issue of “re-considering the expulsion of Eritrean asylum seekers” to their country of origin.

The French language Tribune de Genève reported that the arrival in Switzerland of 5,721 Eritrean refugees between January and September 2014 prompted the PLR leader to ask for such much hardened action. The newspaper noted that the number of Eritrean asylum seekers and refugees exceeds even that of Syrians. It put at over 25,000 the number of recent caseload of Eritrean refugees in Switzerland adding that almost of them are not working.

The PLR is one of the centre-right coalition of parties in the Swiss parliament. The Swiss Social Democratic Party, the second largest in the country, and its allies are opposed to further hardening of refugee laws and it is highly unlikely that the measure to be proposed by PLR will be approved. In fact, a recent Swiss mission to Eritrea found the country to be unwelcome to its own people and that 90% of Eritrean asylum seekers deserve protection until the situation changes to the better in Eritrea.