A delegation of the Eritrean People's Democratic Party participated at the convention held by the Progressive Alliance in the city of Stockholm, Sweden 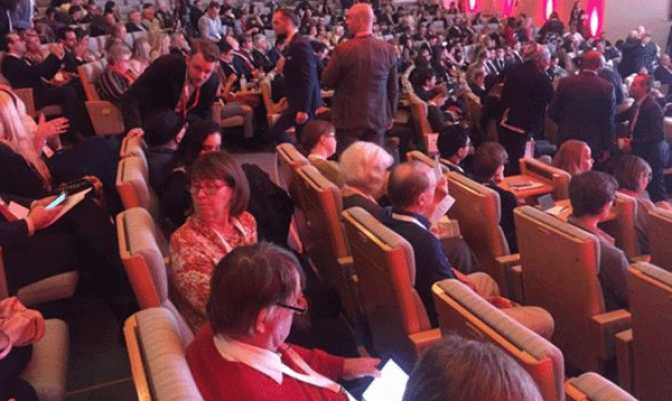 Social Democrats and Socialist Parties that came from all of the continents participated at the convention held in Stockholm, capital city of Sweden, on 15-17, 2019. Mr. Menghisteab Asmerom, Head of Organizational Office, and Dr. Habtemichael Teklebrhan, Head of Finance Affairs Office, attended at the convention.

The E.P.D.P. delegation distributed a written material that demonstrates the current abysmal condition in Eritrea to the convention attendees. The written material that was distributed to the convention participants expressively manifested the agreement forged between the Eritrean and Ethiopian leaders that failed to bring any change to Eritrea and its' people on one side and it exposed the flagrant human rights deprivation perpetrated by the regime in Eritrea on the other hand. It further elaborated that today's Eritrea like yesterday is without constitution and rule of law, a playground for a galloping sole dictator, a country characterized by absence of freedoms of press, expression, association and organization where fellow Eritreans are hunted down on the basis of their religious and political beliefs; where existence of contesting parties is denied, religious properties and establishments are confiscated and its people became a victim of migration and human traffickers. On top of that, the E.P.D.P. delegation participated in discussions and adaption of political resolutions and practical programs, electing board members and various issues regarding the Alliance and its activities all over the world. Based on the constitution of the Progressive Alliance that states one vote for one party, the E.P.D.P participated in electing board members, ratifying drafts and work programs as well.

Herein is summary reportage of the convention

Reportage of the Progressive Alliance in Stockholm city, Sweden

A convention attended by Social Democrats and Socialist Parties that came from all of the continents was held in Stockholm, capital city of Sweden, on 15-17 November 2019.

In November 15, 2019 a meeting of the administrative committee was held whereby all regular and associated members of the Progressive Alliance participated. The meeting was moderated by Mr. Johan Hassel, international secretary of the Social Democratic Party of Sweden, Mr. Constantine Woinoff, Progressive Alliance program coordinator, and Mr. Conny Reuter, General Secretary of SOLIDAR, (both from Germany) to perform the following functions.

Board and Leaders Meeting

The newly elected Board later convened under the chairmanship of the Prime Minister of Sweden, Mr. Stefan Löfven, to discuss and set the political guidelines, and organizational policy issues as well as to elect the Coordinator and appoint the auditor. Leaders of parties that didn’t have representative on the board were invited to participate without voting rights.

Stefan Löfven (photo below), Chairman of the Social Democratic Party of Sweden (SAP) and Prime Minister of Sweden welcomed all participants of the Convention at the biggest meeting hall in his opening speech. In his speech he outlined strategies for the success of the ideals of Social Democracy.

A keynote speech on a new progressive era was delivered by Antonio Costa, Secretary General of the Socialist Party (SP) and Prime Minister of Portugal.

This was followed by a panel discussion under the theme “A new progressive era”. The panelists were:

It was stated among other things that “Digital Capitalism is not simply a fate which the individual has to accept and cannot alter. We can shape the interaction of politics, industry and society to the benefit of mankind, if only the required changes are backed by a strong progressive movement”.

Climate change and a suitable society

The second panel discussion was on Climate change and a sustainable society. Among the panelists was the Swedish Minister of Finance, Magdalena Andersson.

Global deal for jobs in a digital era

Among the panelists were, Mr. Antti Rinne, leader of the Social Democratic Party and Prime Minister of Finland and Mr. Karl-Petter Thorwaldsson, President of the Swedish Trade Union Confederation (LO). Managing of the new digital era companies by taxation and research on digital sustainability were vividly discussed.

This panel was presided by Ann Linde, Minister of Foreign Affairs, Sweden, Jonas Gahr Store, President of the Labour Part of Norway, Emily Thornberry, Member of Parliament, UK Labour Party, Zoran Zev, Prime Minister of North Macedonia etc. The way North Macedonia solved the conflict concerning its name was lauded and the ever illusive conflict between the Palestinians and Israel was discussed.

Salahattin is the Chairman of the Social Democratic Party in Turkey currently sitting in jail in Turkey. Before handing the price to his wife Başak Demirtaş who also held final speech, a laudatory speech was given by Peter Hultqvist, The Minister of Defence of Sweden and by Sergei Stanishev, President of the Party of European Socialists. The day ended by dinner party hosted by The Social Democratic Party of Sweden and The Swedish Trade Union Confederation (LO).

SATURDAY 16 NOVEMBER-TOPIC: THE STRUGGLE FOR JUSTICE

The Challenges of Social Democracy in a Globalized World

More and more countries are ruled by authoritarian and intolerant leaders. Income gaps between people are widening. The number of refugees is increasing with the number of conflicts. While Social Democracy is weakened in many places, progressive reforms are needed more than ever. How can the global social democratic movement make its comeback?

Stefan Löfven Prime Minister of Sweden was one of the panelists. The panel was moderated by Anna Sundström, Secretary General, Olof Palme International Center.

Global Justice- What does it mean?

Just Transition – From Vision to Action

We are facing the greatest challenges of humanity – climate change. What is the labour movement’s role in the transition towards an environmentally sustainable world?

The afternoon session was conducted as follows:

With over 100 million inhabitants, Ethiopia is Africa’s second most populous country. Authoritarian regimes have ruled the country for many years, but since the government of Prime Minister Aby Ahmed took office in the spring of 2018, a wide programme of political and economic reforms has been launched. What challenges lie ahead on the road towards a functioning democracy?

The panelists emphasized that they had high hopes on the government of Dr Abiy, but now that he has not been able to deliver what was promised and failed to take action against the killings and the aggressive Islamic activist Jawar, they have lost confidence and even insinuated that Abiy might commit genocide. They gave a dismal report on the future of Ethiopia. Naturally, the EPDP delegation attended this session and was given the opportunity to comment or ask questions (an opportunity which was not given to other participants). The delegation stated that almost all Eritreans were also excited about the coming of Abiy Ahmed. We all hoped that the democratic changes in Ethiopia might bring changes in Eritrea too. Our hope was dashed by the fact that Prime Minister Abiy signed treaties and agreements with the dictator without any consideration to the needs of the Eritrean people. Finally the EPDP delegation asked the following questions: 1. you stated that Premier Abiy might use force and commit genocide, does he really have the power to order the army considering that most of the military power is in the regional administration areas, kilils? 2. With all the violence taking place in Ethiopia today, do you believe that liberal democracy can be established in our area?     3. In hindsight, do you regret that the Ethiopian elites especially the Amharas pushed the previous TPLF dominated government of Ethiopia too much starting the day they assumed power?

Upon which Ahmed responded briefly as follows: 1. that is the problem, he has no power and we really don’t know what he will or might do. 2. Yes why not, we are also humans. 3. No, they were murderers.

In the social dialogue session, conversation on how social dialogue can advance peacebuilding and democracy was discussed by taking examples from the Somali and Swedish trade union movement. Osmar Faruk Osman, Secretary General, Federation of Somali Trade Unions and Mohamed Said, Somali National Association in Sweden presented their experiences. Oscar Ernerot, Swedish Trade Union Confederation moderated the discussion. It was heartwarming to hear that the Somali trade union had established a harmonious relationship to the government after eight years of struggle.

The day was concluded by Solidarity mingle and dinner.